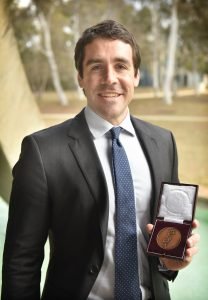 Professor Geoffrey Faulkner has been awarded the 2016 Ruth Stephens Gani Medal for his work, which could underpin future treatments for devastating brain disorders such as Alzheimer’s disease and schizophrenia.

The neurogenomics researcher said he was honoured to receive the award and hoped his work would improve understanding of how the brain functions.

“Our work is intended to better explain how the brain works by analyzing the complete set of genes – the genome – present within individual brain cells,” Professor Faulkner said.

“We’re also looking at diseases where memory fails, with a focus on dementia in particular.”

Professor Faulkner said his research had found that those parts of the genome most important for brain function were the most likely to carry mutations.

“Because of recent technical breakthroughs, it’s now possible to sequence the genomes of individual cells,” he said.